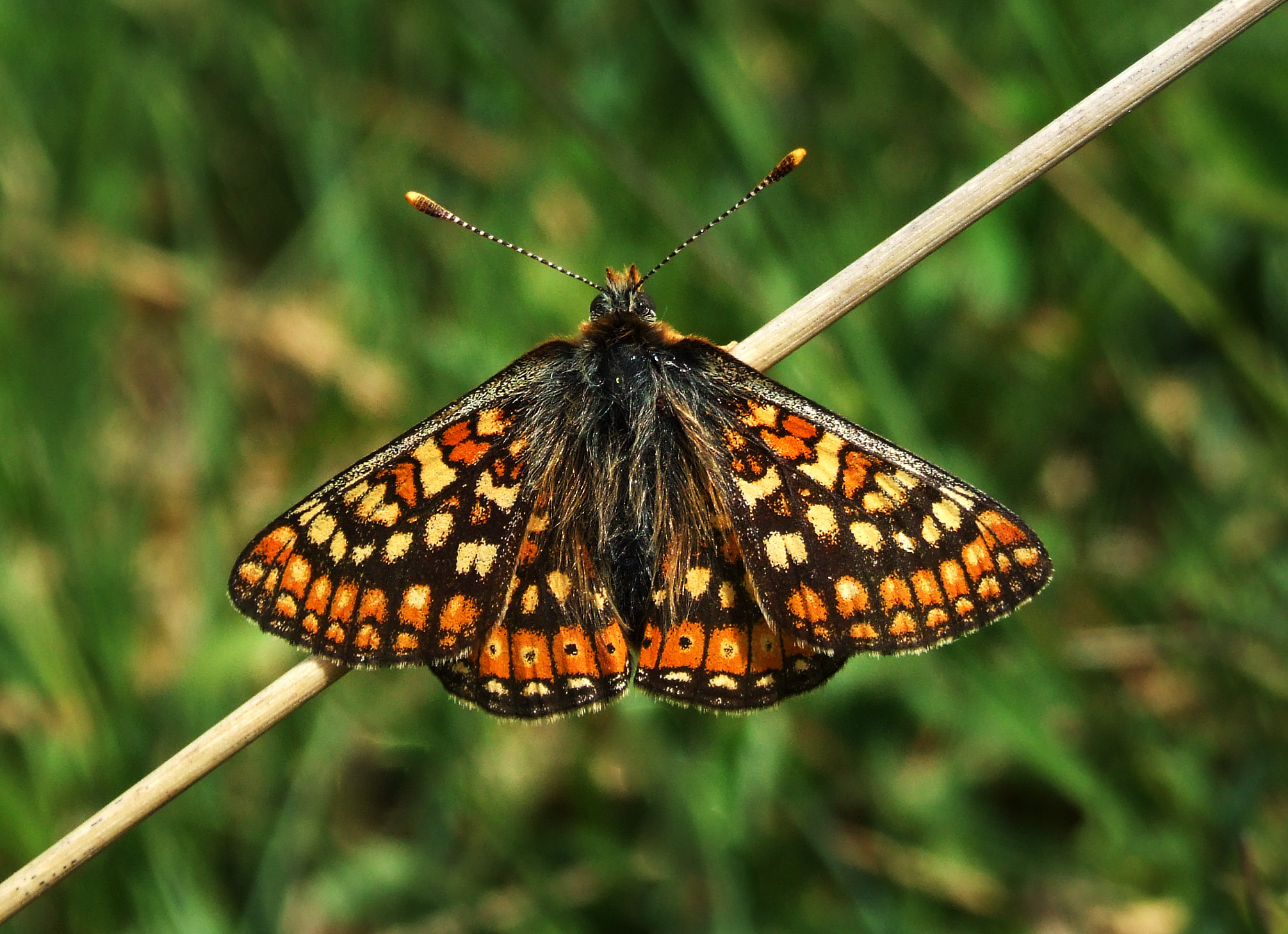 The Story So Far

At one time there were over 200 Marsh Fritillary colonies in the old county of Cumberland but by Year 2000 that number had dwindled to only three and by 2004 we faced extinction in the new county of Cumbria. This story does not deal with the reasons for such a decline, such reasons being offered in other presentations, but it charts what happened on that fatal day of realisation and beyond that to the time of writing in Winter 2008.

The Cumbria Marsh Fritillary Action Group was formed in the early 1990’s to try to arrest the decline by conserving the colonies which survived and by managing the habitat where they were. We had a lot to learn and in the early years we tried many different things but still the situation got worse. Three colonies became two and then one but even then we had over 200 larval webs at that one colony as recently as 1995. But it was at that last colony where we, four of us, stood over just one egg batch in 2004. We had just painstakingly surveyed the entire site and found only one batch though a much smaller one was found about two feet away and probably laid by the same female.

We had to make a decision. Do we remove the larvae (caterpillars) from the site and take them into captivity to protect them and start a captive breeding programme. The four people were two from Butterfly Conservation, one from English Nature (now Natural England) and one from DEFRA. We knew we could not remove them that day as we did not have a license to do so bearing in mind the protected status of the species. We could have decided to leave them in situe and risk them surviving until next Spring, emerging from hibernation and (miraculously) somehow starting to re-build their numbers. History tells us that this species can fluctuate in numbers greatly. However recent experience in Cumbria was that of severe decline and systematic recording of Autumn larval webs going into hibernation told us that only 50% survived the Winter to re-emerge as Spring larvae. So, could we risk losing half of only one? If we had lost that larval batch then the Cumbrian race of Marsh Fritillaries would have been lost forever and with it the Cumbrian genes. We had already had much earlier specimens tested biologically to tell us that the genetic profile of Cumbrian Marsh Fritillaries was slightly different from other colonies elsewhere geographically and others were different from each other also.

If we took the remaining larvae into captivity we could at least attempt to retain those unique Cumbrian genes. It was agreed unanimously to recommend that the larvae were taken into captivity and to proceed with the urgent application for a license to do that.

At about this point the most important factor in changing the future direction of the Marsh Fritillary in Cumbria emerged in the form of Dr Keith Porter based at Natural England in Peterborough. He had become aware of the Cumbrian situation and drove through the license application at speed. Having marked the batch with a cane it was hoped it would be fine next day so that, license in hand we could find the larvae again. It was and we did. A white peg, a bit like a tombstone was driven into the ground to mark the place where the Marsh Fritillary became extinct in the wild in Cumbria. That peg is still there to this day but will now probably only be found by one person.

That ended the first part of the Cumbrian Marsh Fritillary story.

The second part of the story started and Keith Porter offered the idea that no matter what excellent work we might have done over the years to manage the habitat and do all the other things we read in books etc. there were three other possible even probable reasons for decline. None of those reasons apart from one had been considered before. It was possible that our colonies had become infested by and destroyed by parasitoids, well known in Marsh Fritillary populations. That was felt to be unlikely but could not be discounted. The second was that we might well have got site management at ground level correct but shade from large trees around the edges increased by the year, particularly from fast growing Silver Birch. Such shade was not an obvious problem in high summer but in the most important Spring months when the sun was much lower the sunlight was being shielded from the larvae. They need sun just as much as foodplant at that time and lack of sun would restrict their growth to the point where they did not reach the pupation stage and would simply die as larvae. We have since proved this theory during captive breeding at close quarters observation.

The third reason and one which was to become very real was that genetic weakness caused by successive inbreeding within now very isolated colonies with much reduced numbers in each, would lead to infertility and ultimately extinction. The colonies which had remained were so far apart there was no chance of mixing between colonies to maintain genetic strength. This sounded very plausible and now, several years down the line, some of us, me included, are firmly of the opinion that this is/was the reason for extinction in the wild in Cumbria in 2004. It is a sobering thought that if this can happen to Marsh Fritillaries then it could also occur with other species. Indeed one can look at the parlous situation the High Brown and Pearl Bordered Fritillaries are in – and wonder. Different species react differently however. Marsh Fritillaries are known to have huge fluctuations in numbers partly due no doubt to them laying egg batches in hundreds rather than singly. That factor alone could mean those that lay eggs singly are more resilient, but I am not sure we know that yet. Something for all of us to ponder and hopefully learn more about.

Having taken the last batch of approximately 150 Cumbrian larvae into captivity Keith Porter and Sam Ellis, then our Regional Officer, obtained a licence to take a similar number of larvae from colonies of Marsh Fritillaries in the Argyll region of Scotland and our grateful thanks for that go to Scottish Natural Heritage. The resultant number of just under 300 larvae were split into three breeding lines, pure Cumbrian, pure Scottish and a Cumbrian/Scottish mix.

In the first year we had a very early indication of the possible problem. The pure Scottish larvae bred through very successfully and eventually emerged well as adult butterflies. They mated and laid lots of egg batches which also hatched into second generation larvae very well. The Scottish/Cumbrian crosses were not as successful and we suspect it was the Cumbrian contingent which failed to stay the course. It could be that some larvae failed to make it to pupation or that those Cumbrian adult butterflies which emerged were infertile and the eggs laid were infertile even if mated with a Scottish opposite sex. That was to become the more likely reason as the pure Cumbrian stock failed completely. All three breeding lines were raised in exactly the same conditions and place. In circumstances like this one can never be 100% certain but the balance of probability is that there was a genetic problem with the Cumbrian stock. Looking back, that seemed to vindicate the decision to take that last larval batch into captivity in 2004. It is almost certain we would have lost them over winter or at best in the following breeding season. At least we now had some Cumbrian genes in amongst the Cumbrian/Scottish captive stock. When re-introductions were made that new stock line would adapt to Cumbrian habitat and in time become true Cumbrian albeit with some Scottish origin.

Our captive breeding programme was hugely successful and by 2007 we had boosted the original number of 300 larvae to about 45,000. Four re-introduction sites were prepared prior to 2007 and all were recently extinct sites where we had reason to be sure why extinction had occurred and we had taken corrective action.

Spread over the four sites we released 42,000 larvae in total but at different levels depending on the size and quality of the site. One site is in West Cumberland, another is on the Solway Plain, a third is in central Lakeland and the fourth is near Penrith in the north east of Cumbria, all within the old traditional range. These colonies would be core sites around which we plan to have satellite sites in close proximity thus forming metapopulations which would mix to maintain genetic strength over time.

Early signs after two summers of 2007 and 2008 are that the re-introductions have gone very well indeed with over 100 larval webs produced at each of two of the sites in 2008. A third is doing very well for its size but the fourth is struggling though we are aware of the reasons for that.

The above comments give a flavour of what has happened and why but it is a much longer story of course which could fit neatly into a much bigger publication. We have learned a lot and still will learn more. The captive breeding programme will continue as we strive to find and activate the satellite sites referred to above.

Many lessons have been learned but if I am to record the three main lessons learned that is easy. Firstly if a Marsh Fritillary re-introduction is to be made it must be with a considerable number of larvae. Survival rate at adult emergence rate is only about 1% in the wild though much higher in captivity. You can well imagine therefore that if you want 200 to emerge as adults to have a decent chance of mating and moving on to build up numbers, you must release many thousands of larvae to begin with. The second thing is that the re-introduction site must be spot on in terms if habitat condition. Management must be in place through grazing or cutting, preferably the former and surrounding tree height must not shade out the Spring larvae. That is vital. An abundance of Devils Bit Scabious is also vital of course and so too is the size of the site and the close proximity of other sites to avoid future isolation. The third and equally important thing is to prepare and consult properly again and again. Consult experts, don't just go ahead and hope for the best. You must have every reason to believe you are going to be successful - because many other re-introductions have failed before.

I hope that gives a fairly concise overview of what has happened and why. We press on but as always we continue to consult and with that in mind I am always pleased to have observations, and constructive comments from anyone. That is all part of the very valuable learning curve we are always on.